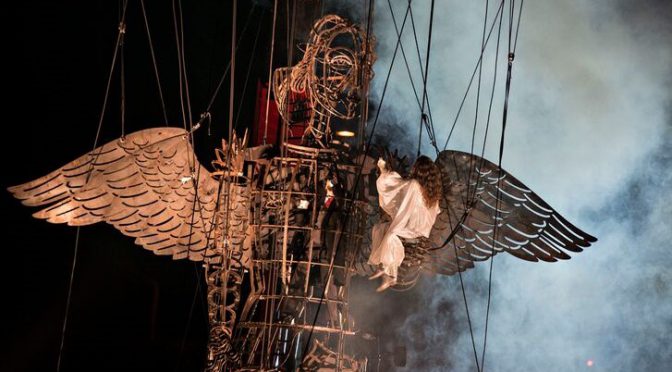 A Poetic Meeting in the Moonlight

Festival of Wonder is proud to present a unique outside performance, which tells of a meeting between an 8 meter tall puppet and a dancer, high up in the evening sky.

The puppet is manipulated by 9 puppeteers, while the moonlight meeting is accompanied by newly composed music of Marko Ivanovic, one of the most prominent composers in Czech Republic. This giant puppet, which was part of the events surrounding the opening of Plzen, European Capital of Culture 2015, was made by Josef Sodomka og Petr Pisa. They are both in Silkeborg with the giant puppet and with the performance Obludarium.

The show in Silkeborg came about through cooperation between Festival of Wonder and Petr Forman, artistic director of PLZEN, European Capital of Culture 2015 and supported by Silkeborg Municipal.

Watch video about the performance

Movie from Festival of Wonder 2022

FESTIVAL OF WONDER ON SOCIAL MEDIA

Watch the videos from Festival of Wonder

Click here to watch all videos from the festival

Through the years many exceptional Danish and international theatre groups have performed at Festival of Wonder: Silkeborg International Puppet Theatre Festival…
Watch the Festival Profile here